For the treatment of viral hepatitis, our company developed a radically new technology, the so-called Superinfection Therapy (SIT).[1] SIT is a host-directed biological therapy that extinguishes viral replication of other viruses by the activation of innate interferon-dependent antiviral pathways. SIT has already been shown to be safe and effective during a finite course of treatment in patients infected with two completely different hepatitis viruses (HBV[DNA] and HCV[RNA], respectively). SIT could terminate infection in many-millions of chronic HBV patients worldwide still requiring life-long conventional treatment, which is associated with risks of adverse reactions, drug resistance, low adherence, and increased costs.

As interferon is active against most vertebrate-infecting viruses, SIT could also mitigate the world-changing effects of the next flu pandemic, for which we aren’t ready to keep the world safe. Since our drug candidate is easy-to-produce and store, it could generate financial incentive for the development of a post-infection pandemic therapeutic flu vaccine.

A conventionally produced version of our drug candidate has already been clinically validated in 42 acute hepatitis patients and also in 4 chronic hepatitis patients with advanced fibrosis resistant to all conventional therapies. SIT, therefore, can be considered as a low risk for high return investment in a market, which is valued at USD 3 billion and has the second largest revenue share owing to the high prevalence of hepatitis B.

Because of its major economic importance to the world’s poultry industries, attenuated IBDV strains are used as commercial vaccines. These vaccines have an excellent safety record. Importantly, IBDV is not known to be a hazard in transmitting to humans despite its worldwide distribution in the domestic fowl.

Despite the success of the Hungarian clinical trials, there are several unresolved issues hindering regulatory approval of the superinfection technology platform. During the past years regulatory submissions require more extensive characterization of the drug substance including extended toxicological evaluations. Therefore, added preclinical work needs to be performed before an IND can be submitted to a regulatory authority.

We intend to develop a well-characterized substance that will be developed into an orally administered IBDV biologic drug, for the treatment of advanced chronic HBV/HCV infections with unmet needs. To this end Superinfection plans to broaden the preclinical data set and submit an IND of R903/78. We are planning to initiate a new clinical trial for the treatment of advanced viral hepatitis B patients, with unmet needs.

The Hungarian SIT program was conducted using a conventionally produced attenuated IBDV virus before strong regulatory principles were established in Eastern Europe for biological substances. Therefore, it was essential to establish reproducible manufacture of homogeneous IBDV drug substance that satisfies both FDA and EMA regulatory requirements.

In order to remove this single most important regulatory hurdle we worked together with our former US partner, VectorLogics, Inc (merged in 2012 with DNAtrix, Inc. Houston, TX), obtained several grants in the USA and patented a new approach using reverse genetics to create a new biologic drug candidate (R903/78). 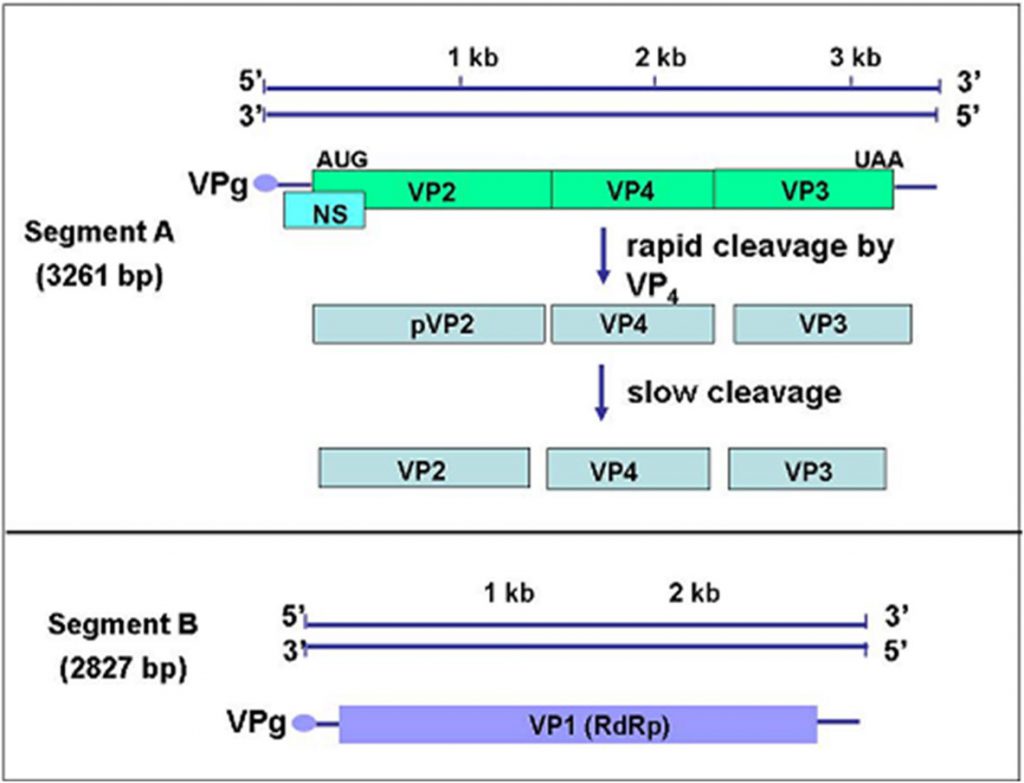 Fig. 5. Genome organization and proteins of infectious bursal disease virus; Segmented dsRNA virus, such as IBDV, can be recovered from its cloned cDNAs of genomic segments A and B.

We have established a strategic alliance with a German CMO, Vibalogics GmbH (http://www.vibalogics.com) to develop the manufacturing process. In 2011 we were awarded close to 1 million EUR within the framework of Eurostars grant program to develop assays, release criteria and manufacturing processes for our program. Then, in 2012 we were awarded 1.1 million EUR from the Hungarian Government to develop animal models and perform animal toxicology studies. Together with our German partner we have performed preclinical studies and characterized our R903/78 drug candidate. In 2017 we evaluated conditions for large scale production with ProBioGen AG (https://www.probiogen.de) using their proprietary AGE1.CR.pIX cell line. Yields far exceeded that of conventional cell lines by 1000 times. With an expected human dose of 10^7 infectious units (IU), a hundred thousand to a million doses can be produced in a 1 L defined media culture.

The major goal of our project is to develop a well-characterized antiviral biological drug product that can be developed into a highly valuable orally administered therapeutic agent, for the interferon free therapy of advanced cirrhotic HBV/HCV hepatitis patients with unmet needs. Based on our previous clinical results the R903/78 biologic drug candidate might be used for the treatment of decompensated patients, for null responders, partial responders, breakthrough infections and relapses. Therefore, the R903/78 drug candidate would be able to complement the currently used therapies.